In my previous article about webfont loading I showed a technique about how to load webfonts without blocking page rendering and without annoying the users with flickering text on all pageloads. This time I show you an optimized version of the script and provide a solution for WOFF2 support for the newest browsers.

How to do this?

Overview of the script

Lets take a look at the script

The full script and some Grunt tasks for minification are available on Github/bdadam/OptimizedWebfontLoading. There are also some demo files.

Where to put the script?

The script has to be in the HEAD of your page above all stylesheet declarations (link[rel=stylesheet]) so that it doesn't block page rendering (the browser doesn't have to wait for the CSSOM to be ready).

What happens when localStorage is not available?

This mostly happens when cookies are disabled or the website is loaded inside a WebView container in a native app. In this case the code still works and falls back to normal browser caching. The CSS file is requested on each pageload, but served from the browser cache - as long as the CSS file is served with proper caching headers.

I thinkt it is enough to only provide webfonts for those browsers which support the WOFF or WOFF2 format. This means ca. 90% of the users world wide. Other browsers should get the text rendered in a fallback font.

The users with these older browsers are going to be thankful, because we don't waste their limited resources (CPU, memory) on some fancy stuff.

Although the technique shown in this article is at the moment my preferred way of loading webfonts, for comparision I provide two more techniques.

I ran some tests on webpagetest.org with 3G connection.

The first visit was basically the same for both the localStorage and the async CSS solution. They both first rendered the text in the fallback font, and then switched over to the webfont. Causing blinking once. Loading the fonts from external files lead to invisible text until the fonts were loaded. This deleayed rendering with 0.6 seconds.

The second visit comparision also shows some differences between localStorage and async CSS. We can clearly see, that loading from localStorage doesn't cause any rerendering. Once the HTML is downloaded, the page is rendered immediately.

The async CSS way renders the page in the default font and then rerenders it with the webfont. This causes flickering for the user on every pageload.

No. 1 is the winner in this regard.

To illustrate the differences here are some filmstrip views: 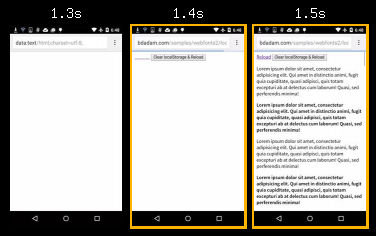 What do you think of this technique? Do you have some ideas to improve it? Please leave a comment.

As @CrocoDillon recommended, I added the third (optional) argument to
new FontFace(..., ..., {}) when checking for WOFF2 support. Otherwise some browsers throw an exception (Chrome 35 and 36, Opera 22 and 23). Take a closer look at the pull request.